The Relationship Between Productivity and Safety

Home/News/The Relationship Between Productivity and Safety

The Relationship Between Productivity and Safety

I was recently working in the field in the oil patch when a familiar concern was raised.   Operators were (carefully) complaining about new safety protocols that had recently been put into place. While each of them understood that safety is still a major focus area for most oil companies, they believed that the new program would realize no discernable improvement in safety while there would be a reduction in productivity.

They weren’t fighting the protocols per se. They were struggling with the changes and wanted to be able to justify the extra work to themselves.   None of us wants to do work that has a negative impact on output. 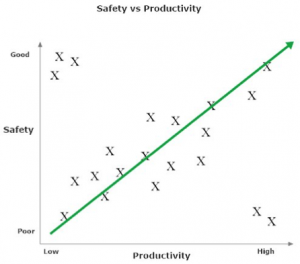 This is not a new observation. Over 20 years ago, when I first started working with field staff, I had to deal with this issue. And yet, despite the persistence of these complaints, the data does not support the operators’ contention. The International Association of Oil and Gas producers shows a steady long term improvement in safety with a reduction in fatalities and total recordable incidents for the past 15 years. Clearly, in aggregate, safety programs work and improve safety.

If you were to plot out many organizations, you would get a plot that looks like this. 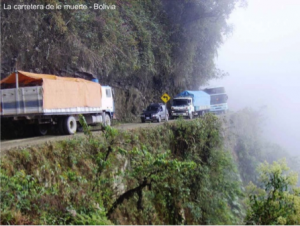 Years I ago I was engaged at a relatively new pulp mill. The mill was heavily unionized and in a brutal battle with management. Both the union and management team were poking at each other every opportunity that got.   I was concerned when I showed up there that the union would see me as another management initiative to poke them. To my surprise, my presence didn’t even cause the smallest of ripples in the pond. As it turned out, I was the ninth consultant to arrive in 10 years. The Union planned to just ignore me as they had every other group that preceded me.

Most notably about the site was that it ran terribly for such a young facility. It was dirty, it stank, there were standing puddles of water/pulp everywhere. 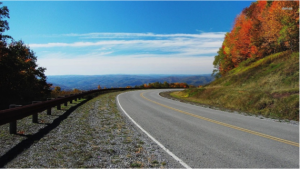 I started the project by spending time with the Union leadership. After I gained their trust I agreed that I would work with them solely on safety initiatives (no budget).   Management reluctantly agreed.   It wasn’t 3 months that the facility set a production record, and if I remember correctly, we set one each of the following 6 months.

It is not that safety is first or that productivity is first. The reality is that they truly go hand in hand.